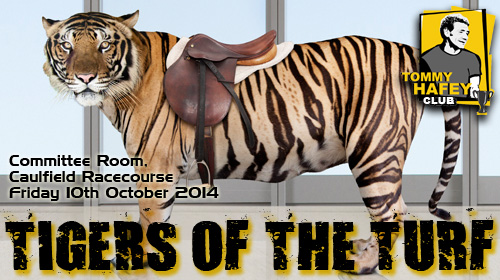 What another sensational day! The Tigers of the Turf function is fast developing a reputation for THE way to switch from the footy season to the spring racing carnival.

The magnificent Committee Room at Caulfield race course is the perfect venue overlooking the race course and all the preparations for the next day’s Caulfield Guineas meeting. 180 guests enjoyed another splendid menu of entertainment, food, drink and companionship.

THC sponsored player Alex Rance was presented with a trophy to mark his 100 game mile-stone (v Port Adelaide round 13) by Mike Perry who interviewed him and then the other two Tiger guests Ivan Maric and Jake King. All spoke of the mid season turn around inspired by some tough personal assessments and team pledge to be totally accountable. Ivan and Alex were very up-beat about 2015 season prospects while Jake spoke glowingly of his time at Tigerland and his strong bonds with the players.

Football Operations Manager Dan Richardson also spoke about the current trade and up-coming draft, but was fairly tight lipped about what the Tigers were up to!

MC Bruce Clark is without peer when it comes to knowledge of the racing industry, personalities, jockeys, owners, trainers, you name it. We are indeed fortunate to have him as our MC for this function.

Bruce began by introducing MRC CEO Brodie Arnhold who outlined the up-coming Caulfield season. Then followed a penetrating interview with top jockey Tommy Berry. What a story is Tommy Berry. A sparkling interview with Jason McLachlan and Brad Rawiller was insightful and entertaining as was his  one-on-one with Rob Heathcote.

A great range of auction items saw successful bidders walk away with tickets to the Carbine Club’s Derby Eve lunch, tickets to the Members Reserve for Caulfield Cup day, jockey silks in Tiger colors signed by Tiger greats, tickets to Moonee Valley races, a table to a 2015 Footy Show, a framed, limited edition print of the Tigers 1980 premiership team and lunch for 8 at the Malvern Hotel with Jake King and Dale Weightman. BUT, the highlight had to be the auction of the Tiger Rocking Horse, complete with roar and signed by players, a fitting conclusion to a lively auction.

KB and Dr Turf, direct from their SEN program, then delivered their very best repertoire including tips for the Caulfield Guineas meet. As it turned out, Brad Rawiller rode the winner of race 7 (tipped by Dr Turf who also tipped the winner of race 9); KB tipped the winner of race 8 and to round out the day Tommy Berry got up on Big Memory in race 5. The message is clear: if you want to mix with the stars and get the “good oil”, book early for next year’s Tigers of the Turf function!

The day’s proceedings came to a stylish conclusion when the representative for Simone Perele Lingerie presented the prize for the lady hat/fascinator competition.

If there remained any doubt about the popularity of this “out-of-footy” season function, this was well and truly put to bed by the sheer enjoyment and satisfaction expressed by every-one who attended. Surely it’s time the THC Tigers of the Turf function was classified an official Spring Racing Carnival event?

We have 86 guests and no members online