Tigers Of The Turf 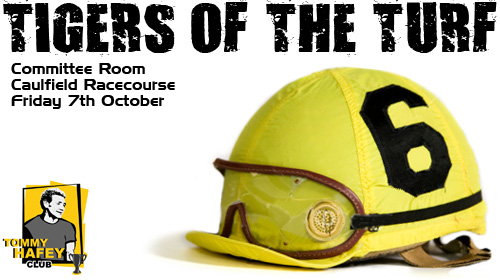 Imagine a  Melbourne Spring Day, in the Elegant Committee Room at the Heath, more commonly known as the Melbourne Racing Club, Caulfield, with a Tiger flavour,  a dose of footy, some fantastic Richmond "die hards" all mixed together to launch the start of the Melbourne Spring Racing Carnival "Tiger style".

The Tommy Hafey Club worked extremely hard to assemble what could arguably be the best field for the entire Spring Carnival.
We were fortunate to have Bruce Clark (TVN’S head presenter) act as MC and in our case also act as Chief Steward. The line up was something to be envied, reads like a who’s who of racing.  Three panels were presented to the packed room and, in no particular order,  the stars included:
- our own Kevin Sheedy (in his GWS scarf?) and Paddy Guinane (both successful racehorse owners);
- trainer Mark Riley;
- race caller Dan Milecki (who was outstanding with his call of the RFC Caulfield Stakes which was won by the veteran of the field ,Tommy Hafey, runner up Disco Roach and a triple dead heat for third: Bourke, Barrot and Clay);
- racehorse syndicator Rob Slade;
- Chairman of the Moonee Valley Racing Club Bob Scarborough;
- media racing personalities Tony Bourke, Adrian Dunn and Warren Huntly;
- former Club director Anthony Mithen; and
- our General Manager of Football Craig Cameron.
If that wasn’t enough we were very fortunate to have the entire Rawiller family in attendance : Stacey, Brad and Nash (and their parents!).  Nash, in particular, made a massive effort to attend as he was riding track work for Gai Waterhouse up until 11.00 am that morning; he left the track to head straight to Sydney Airport to fly to Melbourne and then onto the stage at the Caulfield Racecourse. All are very keen Tiger supporters and were fantastic contributors on the day.
We were also delighted to have two of the co-owners of Black Caviar on the stage to enlighten us about their exciting journey with their superstar mare. The guests were provided with Black Caviar flags and masks providing great mementos, together with amazing racing videos which all contributed to the wonderful atmosphere.
An inaugural success, with fine fare, amazing raffle and auction prizes including tickets to the Carbine Club Derby Eve Luncheon, tickets to the Committee Room at Moonee Valley, a chance to drive a trotting horse with leading trainer/driver John Justice by your side in the sulky, a table at Channel 9's Footy Show, a dining package at the Emirates Stakes Day and racing silks in Richmond colours.
Some interested attendees were Neville and Valy Crowe, the great Kevin Bartlett, premiership players Mike Perry and Alan (Bull) Richardson and naturally our patron Tommy Hafey with Maureen.
The feedback has been nothing short of exceptional, a day a little different from the normal footy function although the ingredients all blended in to it make an extremely entertaining day for all.
Next year the best advice would be to accept as soon as nominations are called for as, no doubt, based on this year it will be a sell out.
Good luck and good punting.
Go Tiges.

We have 81 guests and no members online