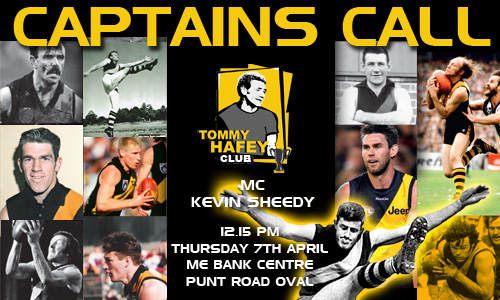 We often get asked, ”how do you keep coming up with such great themes”? And it has to be admitted, after 38 themed lunches, coming up with interesting and entertaining themes is a challenge.

But in the Maurice Rioli room on 7th April, we can confidently say “we did it again thanks to Kevin Sheedy, Kevin Bartlett, Chris Newman, Kane Johnson, Dale Weightman, David Cloke, Bryan Wood, Ron Branton and Trent Cotchin. All (excluding Trent) former Captains who were wonderful players and great ambassadors for the game and our Club.

We were thrilled when Sheeds agreed to MC the function and he did not disappoint, with a sparkling performance culminating in a sensational one on one with KB when the two went head to head trying to up-stage each other.

Proceedings kicked off with Sheeds and Trent Cotchin, an interview during which Sheeds did not hold back, and to his credit Trent was up to the challenge and clearly demonstrated why he is our Captain.

Our oldest living Captain, Ron Branton, was in excellent form with clear recall of his playing days in   the 1950’s and 60’s. Ron was an exceptional player during a period when the Tigers were an all too regular bottom 4 side. His final year saw him Captain a night premiership, come equal second in the Brownlow and take out the Tigers best and fairest award. Then at the peak of his form, he left to coach Myrtleford and secure his future. Ron attends all THC functions and is a popular presence at Tigerland.

Next up were Bryan Wood and David Cloke. Bryan was a triple premiership player at Richmond who  joined Sheeds at Essendon where he enjoyed premiership success in 1985 before continuing as Sheeds runner after a decorated playing career.

After premiership success at Tigerland in 1974 and 1980, David was Captain in 1982, the last time the Tigers have featured in a grand final. He then made the controversial switch to Collingwood, where he enjoyed a successful career before returning to the Tigers to help KB and his young cubs, climaxing a brilliant career by kicking 8 goals in his final match, even sweeter because it was against Carlton and a rare Tiger win!!

In the absence of 1980 premiership Captain Bruce Monteath, Mike Perry conducted a roving mike interview with his son Rhys before Sheeds introduced the final panel, Kane Johnson, Chris Newman and Dale Weightman.
Dale Weightman is rightly recognised as a great Tiger player spanning 15 years but he is also a full-time employee of the RFC and as such has been a continuous presence at Punt Road for close to forty years, a truly remarkable achievement.

Kane Johnson grew up in a Tiger household but was drafted by Adelaide where he enjoyed premiership success before engineering a trade back to Richmond where he resumed his love affair with the Tigers, became a key player and Captain, before handing over the reins to Chris Newman in 2009.

Chris was an inspiring player and Captain who eventually became the oldest AFL player not to play in a finals series but then enjoyed the experience of three final series in a row before retiring to pursue a coaching career. He is currently a development coach at Hawthorn.

After paying tribute to the 18 living players who acted as Captain when the appointed Captain was either out injured or suspended or on interstate duty, the day ended with an amazing double-act between Sheeds and KB. It’s impossible to write about it other than to say there’s never been more laughter and hilarity than these two legends produced. Priceless, and for the fortunate people in attendance, an unforgettable experience.

We have 108 guests and no members online