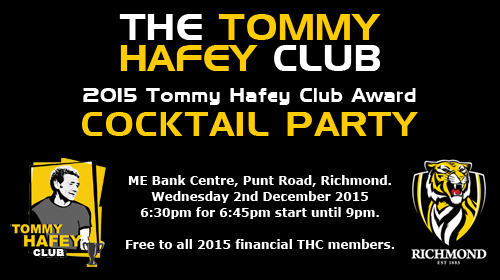 The 2015 member cocktail and THC Award function was held on Wednesday 2nd December in the Maurice Rioli room at Punt Road. Once again it was well supported by members many of whom brought guests for the first time.

President Rob Edgley opened proceedings with a brief history of THC functions since the Club began in 2003, with 37 lunch and 13 member functions making this the 50th function to be organised in the 13 year period. During that time THC contributions to the RFC have exceeded $200,000. Rob gave a brief outline of the 2015 functions and a hint that next year would almost certainly see a major function dedicated to Tommy.

THC patron Maureen Hafey was then joined by Matthew Richardson to present the 2015 THC Award. This was awarded to Chris Newman in recognition of his wonderful contribution to the RFC over 15 years during which he captained the Tigers for 4 years and played a total of 268 games. The THC Award is an annual award made to the person deemed to have made a significant contribution to the Richmond FC and demonstrated Tommy’s 4 golden D’s: that Dedication, Discipline, Determination and Desire will deliver your Destiny. Maureen presented Chris with the bronze bust trophy of Tommy and Matthew then engaged Chris in a lively and entertaining interview about his playing career and finished by wishing him every success in his new position as Development Coach at Hawthorn.

Michael Perry then introduced the new players recruited during the trade period, Chris Yarran, Jacob Townsend and Andrew Moore, and conducted a Q & A with each. Chris, an established AFL player with over 100 games played with Carlton, joins the Tigers as a rebounding defender, Jacob an initial GWS draftee arrives with a reputation for being fierce at the contest and Andrew, brother of former Tiger Kelvin, comes to Richmond from Port Adelaide as a hard bodied, mature footballer. All boys spoke well and were enthusiastic about joining the Tigers and optimistic about 2016.

Once again the catering staff at the Maurice Rioli room provided a wonderful spread of finger food, and the boys at the bar were kept busy replenishing empty glasses.

As has become a feature of these functions, there was a warm, friendly atmosphere in the room and no one was in a hurry to go home.

If you’re reading this and haven’t re-joined the THC please do so as soon as possible since your support keeps the flame of Tommy alive and contributes to the on-going success of the Club we love, Richmond.

And if you aren’t a THC member, please join now!! Click here...

We have 92 guests and no members online