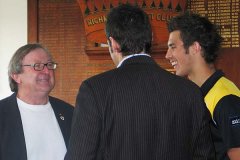 The Members Awards Night held on the 26th of November at the RFC Social Club was a great success.

Timed to precede the end of year Christmas social season and to coincide with the national draft, this function has developed a further attraction with the announcement and presentation of the annual Tommy Hafey Club Award, awarded annually by Tommy to the Richmond person who in his opinion has best demonstrated his golden rules of determination, dedication, discipline and desire in pursuit of their service to the Tommy Hafey Club and the RFC. Previous winners have included Wayne Campbell, Michael Perry and Bruce Smith.

The inaugural winner Wayne Campbell presented the award to a gobsmacked Neville Crowe. Crowey was the MC on the night, had introduced Wayne to make the announcement and presentation, and had no idea he was to be the recipient. Every Tiger supporter knows what a magnificent contribution Neville has made to the Richmond Football Club over a 50 year period as player, official and employee. Few, however, know what a pivotal role he played in the formation and initial success of the Tommy Hafey Club. It would be true to say that without Neville’s determination and persistence, the Tommy Hafey Club may well never have got off the ground. So for all he has done for Richmond over half a century and for the very special role he played in the formation of the Tommy Hafey Club and for the marvellous support he has since provided, Crowey was warmly and enthusiastically applauded as a most popular and worthy winner of the 2008 Tommy Hafey Club Award.

RFC President Gary March addressed the more than 100 members and guests in attendance with positive words and expectations for Tiger fortunes in 2009. Craig Cameron, General Manager Football, spoke about the upcoming national draft and what the Tigers were looking for, which prompted a spirited session of Q & A including a question about the possible recruiting of Ben Cousins!

Neville Crowe then interviewed Tommy Hafey Club sponsored player Alex Rance, who spoke enthusiastically and realistically about his first year at Punt Road and his expectations for 2009. Alex’s dad, Murray had a distinguished career with the Western Bulldogs before returning to his home state where he captained the West Coast Eagles. Alex therefore has a great footy pedigree plus he carries Tommy’s old number (18) and shows every sign of being a 10+ year Tiger champion.

The night was memorable for the serving of a new brew of Richmond Lager, courtesy of one of our sponsors, Hotel Spencer, and most if not all rated the brew a great taste! Michelle Peric did a mighty job catering for healthy appetites and fastidious tastes, ensuring that everyone went home feeling satisfied in every respect.

We’ve been saying for the last two years that it would be the last time we’d be holding this event in the Richmond Social Club but now that the building permit has been approved for the commencement of the Punt Road re-development, it now seems certain that this was indeed the last time.

So next year we’ll be in a new venue. Don’t miss this night; it’s a great way to wrap up the Tommy Hafey Club year.